One of the things that drew me most to Tom Brown’s books was the Vision Quest. The wonder of it was both alluring and frightening.  It held something I couldn’t really understand without doing it. What would I learn? What would I discover? Would I really get up the nerve to try?  Then finally I came to the Tracker School and learned more about the Quest and found out Malcolm Ringwalt actually ran them so it wasn’t something I would have to do on my own.  What a relief- and a curse. Now it was accessible, something I could do. Something I couldn’t make up excuses about any more- so I signed up. 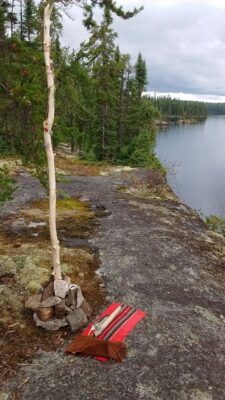 In the months awaiting that Quest I went through every conceivable emotion.  I had never experienced anything that generated so much excitement and fear at the same time.  I really had no idea what to expect. In preparation I’d go out and sit for an hour or more and felt the boredom begin to pound at me.  How could I possibly do this for 96 hours? What would the experience bring?

By the time the Quest finally came, I was amped up to incredible levels.  The tools and preparation we did with Malcolm helped so much and made this seem achievable. Then finally the waiting, all the preparation, all the anxiety were put behind and I found myself greeting the first dawn in my Quest circle.

So, was the Quest everything I had hoped and expected? Yes and no, and so much more.  Trying to recount the experiences of any Quest would never capture what the Vision Quest has done for me, only the outcomes and changes in my life can truly speak for the power of the Quest.

The Quest has also brought a tremendous amount of healing on all levels.  Through the purification of the fast I was able to feel the effects of what I was putting in my body and not only improved the foods I was eating but ended a detrimental relationship I had with alcohol. The emotional healing has been the hardest, yet most impactful outcome of the Quest.  It has taken more courage than anything I’ve experienced to step into- and stay- in the circle knowing I had to face my worst demons.  I know now though that these things can truly be healed and released and I go to the Quest seeking the pain.  Although it can feel like a bottomless well, I know that little by little the waters are receding.

The Quest is not however, all about pain and sacrifice. Through the Quest I have experienced beingness and silence, joy and wonder, peace and oneness. Without the Quest I don’t know that I would ever have understood rapture. By touching these in the Quest, I have opened doorways to bringing them with me into the world.

The Quest too has challenged me, to take action and to wait. It’s shown me new avenues and perspectives. I can look back and see how the guidance of the Quest provided a path that leads me closer to the Creator and to the ways in life through which I can make the most difference.

The Quest has become an integral part of my life. The call to Quest is accompanied by a certain dread and longing, but the gifts of the Quest outweigh any hardship I may have to endure, so when the call comes I begin to prepare and when the time is right, humbly step back into that circle of change and growth and connection.

Reprinted from The Razor’s Edge (with permission from the author)