“Digging Down to Humility”

Most Philosophy students of the Tracker School remember Tom Brown’s or Malcolm Ringwalt’s description of the Vision Quest and its underlying promise of closeness to all Creation and the clarification of one’s path. After the Philosophy I class, I had no doubt that I would quest. I treated this as a challenge to be accepted, a noble task to undertake. I remember looking forward to the time after the quest, when everything would be clearer and more powerful. 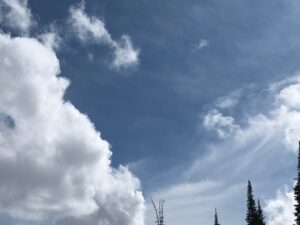 Years later I look back at my expectation with some amusement, for if I were to describe the quest most basically now, it would not be about answering questions or clarifying things or feeling more spiritually in tune. I would instead speak just one word: surrender. We have no other rituals in our culture that even hint at true surrender. Yes, we sacrifice comfort and time and energy to other people, or to things that we believe in. But sacrifice is not surrender. Sacrifice is made so that a value or concept or life choice remains intact. Surrender is unconditional. Sitting in the quest circle, am I willing to give up all of my expectations, my precious thoughts about how things should be, my view of who I think I am—this whole superstructure of my life? Of course I do not want to and I struggle mightily with it, until the haze of misunderstanding erodes molecule by molecule and the truth behind it emerges: I am not in control. I will not know things until I kneel down with humility deeper than I ever thought possible. Days into the quest, I surrender not because I understand this process or know how to do it, but because there are forces so much greater than myself which are determined to teach me—because I have made the sacred commitment. That is why I would tell someone who is considering a quest not to wait until you feel you are ready to surrender. That day will not come. Just do it anyway.

Ironically, after my first quest I still clung to an illusion of control. Because I surrendered once doesn’t mean this habit of control is forever broken. I found that you can walk the path of the light and still muck things up by needing understanding, or requiring strokes, or demanding clarity, or needing to push the buttons. These things make the road a little bumpier, and still bumpier, until there is an inner cry to return to the necessary truth once again: surrender. Another quest is committed to, not only to clear out the cobwebs but also to reacquaint myself with that S-thing. It must be experienced over and over because in between I forget.

Just as surrender is unconditional, so are the gifts that seem to come from it. From my own quests, and from quests of others close to me, I know that the quest gives exactly what is needed. Not what is thought to be needed, but what is needed. These gifts are not all opened at dawn of day five. The glow and the peacefulness are opened then. Other gifts come as surprises days later, weeks and years later: they are glimpses of sacred understanding, or actions prompted by the spirit world. Perhaps the greatest gift is the memory of the circle, for that is always carried and can be revisited at any time.